The moment the Cornish magnolias flower, spring has arrived in England

Cornwall's Spring Story is the proof that spring really does arrive in Cornwall first. Each year six nominated champion magnolia campbellii are monitored in six different Great Gardens in Cornwall to record the date they come into full bloom. The moment all six champion magnolia trees have flowered with at least 50 blooms on each, spring has arrived in England.

In 2021 spring was declared on Friday 26th February which is nearly a month before the astronomical first day of spring (20th March), and much earlier than the rest of Britain.

The head gardener at each of the six Great Gardens sends in a daily report of their champion magnolia campbellii tree, as the buds begin to shed their outer winter jackets to come into full bloom. Each gardener sends photographs and the all important bloom count so that progress across all six gardens can be monitored. Spring is declared when the six nominated magnolia campbellii have 50 blooms apiece.

You can follow the action on The Nare's Live Bloomometer or on social by following @TheNareHotel and @Gr8Gardens. There is comment and intrigue, regular postings and photographs as the season progresses and the trees come into full flower.

THE DATE SPRING WAS DECLARED IN EACH YEAR:

THE REASON FOR CORNWALL'S SPRING STORY

Over the years it has become increasingly apparent that many people do not fully appreciate quite how early spring arrives in Cornwall and how much earlier than the rest of England. Whilst there are lovely gardens to explore in Cornwall throughout the year, really the very best time to visit the Cornish Spring Gardens is when Cornish magnolias are in full bloom during the early part of the season.

The blooming of magnolia flowers often occurs around the beginning of March - a fact rarely even appreciated by gardeners throughout the rest of England. But over the last few years, spring has been declared even earlier, thanks to some mild winters. Cornwall's Spring Story was founded by Toby Ashworth of The Nare Hotel, and in collaboration with The Great Gardens of Cornwall. 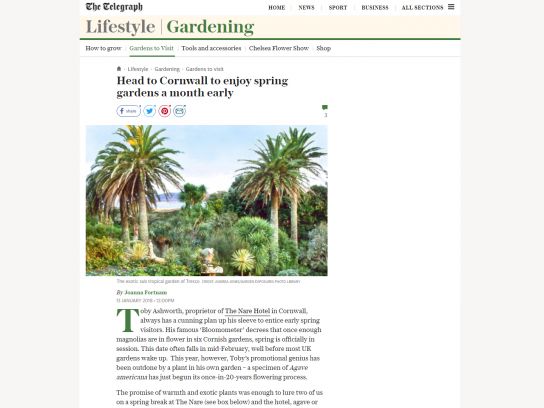 The Telegraph article on Cornish Gardens

Read the recent article by Joanna Fortnam of The Telegraph, which reviews several of the Great Gardens of Cornwall, and highlights the early arrival of spring in Cornwall.

Browse a range of gift ideas for family and friends

Stay in touch with Nare news and seasonal events

An overview of The Nare and what makes it special

The country house hotel by the sea