A Century of Inn Keeping

Bettye Gray, the inspiration for The Nare, with her eldest grandson Toby Ashworth

Toby Ashworth, the current proprietor of The Nare, is the fifth generation of his family to own and run hotels in Cornwall. In 2013 the family celebrated a century of hotel keeping in Cornwall. The occasion also marked the ninth hotel within the family’s ownership to reach a 25th year milestone of ownership, and no doubt achievements beyond the imagination of Toby’s great-great uncle Graham Farmer.

Graham Farmer, opened Tolcarne Hotel, Newquay in 1922 and, leading the way, was Newquay’s Golden Boy and considered the man who put Newquay on the map. He introduced the first proper ballroom, leased Tolcarne Beach and the theatre, and by the mid-twenties was the leading hotel of its type in Newquay, possibly in Cornwall.

Olive Whittington, Toby’s great grandmother, opened Edgcumbe Hotel, Newquay in 1926 and was joined by her daughter, Bettye. After the war the hotel was de-requisitioned and Bettye and Michael Armstrong, her husband, then became the owners by buying out her brother, Peter Whittington (Toby’s great uncle). He and his family also went on to own several other successful hotels in Cornwall. Olive Whittington realised the importance of allowing strong, independently-minded siblings to flourish on their own. From her astute business-sense came the foundation for the model of independent-ownership of the family’s hotels, rather than a group structure, which continues to this day nearly 50 years later.

Bettye and Michael Armstrong ran the Edgcumbe Hotel during the very successful post war years. Their children, (Toby’s mother and uncle) each purchased their own hotels - Watergate Bay Hotel and Headland Hotel respectively. Both are flourishing today. The 90 bedroom Edgcumbe Hotel was sold in 1989, and Bettye Gray (as she was then) purchased The Nare Hotel of 40 rooms. She set about substantially refurbishing and making it the most upscale hotel in Cornwall at the time. It has been the highest rated hotel in the county ever since. Bettye Gray, the family matriarch, was the inspiration for The Nare in its current form. She died, aged 94, a couple of days after hosting the weekly Champagne cocktail party.

Having been brought up in his parent's hotel, and having had a career in the Royal Navy, he now follows in his grandmother’s footsteps. Toby was appointed as Managing Director in 2000 and completed a family buyout of The Nare in 2004. He is married to Katie, a solicitor, and they have two children, Cordelia and Georgiana.

Although it is yet too early to tell, since the girls are still at school, appropriate plans have already been made should the next generation “be fit, willing or able” to succeed in the family business. In the meanwhile Toby, Katie, and the Nare team strive to maintain The Nare to be what is considered the most comfortable hotel in Cornwall. Without changing for changings sake they continue to make steady considered improvements. Plans have been approved to upgrade the east side of the property over the next five years. 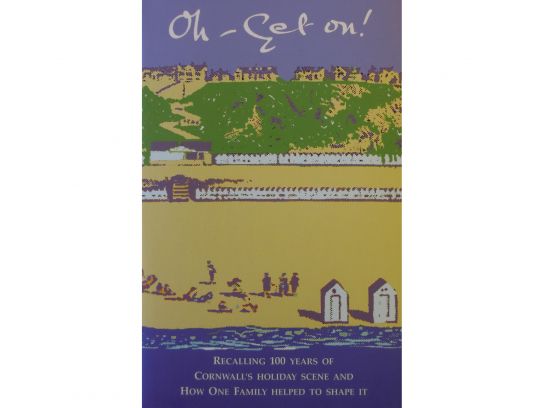 Oh - Get On! by Bettye Gray

Bettye's book recalls 100 years of Cornwall's holiday scene and how one family (her own) helped to shape it. Filled with stories and anecdotes, the book is a fascinating insight into the tourist industry in Cornwall throughout the 20th century.

Browse a range of gift ideas for family and friends

Stay in touch with Nare news and seasonal events

An overview of The Nare and what makes it special

The country house hotel by the sea